Willie's Cacao, or Willies chocolates as it is often referred to, is a British bean to bar chocolate maker (cacaofevier) based in Devon. Willie Harcourt-Cooze transforms fine flavour cocoas from single origins and estates into superior quality chocolate blocks & bars. As the owner of a one thousand acre cacao farm in the Venezuelan cloud forest Willie manages the complete process from cocoa bean to bar. We are proud to include Willies chocolates into our collection to sit alongside the finest chocolate makers in the world today. 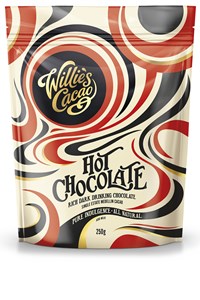 Totally pure and bursting with flavour. Made with one of the world’s great single estate cacaos found in Medellin, Colombia offering incredible richness and depth of flavour. 100% natural, containing only two ingredients, cacao and raw cane sugar. 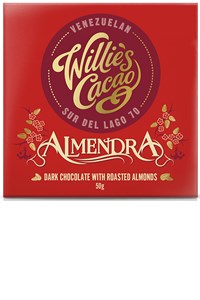 Marcona almonds with their buttery flavour are gently roasted and nestled within smooth, nutty Sur del Lago, 70%, single origin dark chocolate from Venezuela. Made from bean to bar by Willies Cacao in small batches.

Notes of cherries, plums and spice notes mingled with red fruits. Single estate dark chocolate drops with a 70% cocoa content. Ideal for drinking chocolate and all types of chocolate work from chocolate making through to baking, enrobing and decoration.

Containing notes of dark cherries and damsons, this superior quality dark chocolate is created from fine flavour Trinitario cocoa grown in the foothills of the Colombian Massifs. A bittersweet 88% chocolate with great depth of flavour and intensity. 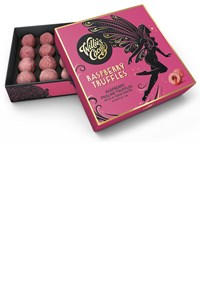 A handmade hard chocolate shell that melts into a smooth creamy chocolate praline flavoured with 100% natural raspberry, containing a liquid raspberry centre. A sweet and salty combination of pure indulgence. 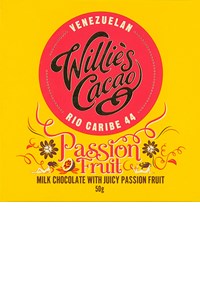 A luxurious white chocolate created from bean to bar at Willie's, containing raspberry. Sublimely creamy with a natural zingy sweetness. 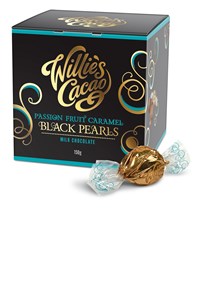 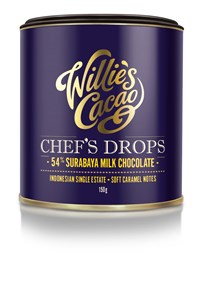 Single estate, Indonesian milk chocolate with a higher than average cocoa content of 54% providing rich caramel notes. Great for drinking chocolate and suited for all types of chocolate work from making truffles to cakes and decorating desserts. 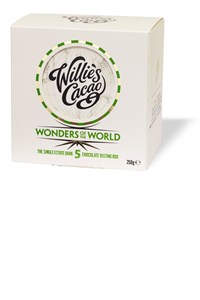 Discover the amazingly individual flavours of the world’s great cacaos. Like fine wines each tastes remarkably different due to its genetics and geography. This box contains 5 bars of single origin dark chocolate from Willie's Cacao. 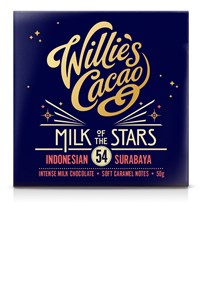 A higher than average milk chocolate containing less sugar and so offering an increased cocoa flavour profile with deep caramel notes. Made from Forastero and Trinitario cocoa from the Surabaya estate in Indonesia. 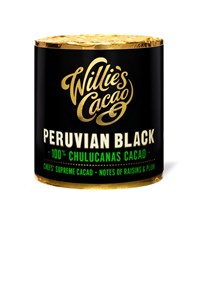 A cylindrical block of 100% pure cocoa created by Willies chocolate for use with cooking and desserts. Simply grate the required amount. Made exclusively from fine flavour Criollo cocoa from Peru. Distinct notes of raisins and plums.

Created By Willies chocolate from fine flavour cocoas from the island of Java in Indonesia providing a dark chocolate with soft caramel and mouthwatering berry notes.

A fruit and nut chocolate bar with credibility by Willies chocolate. Made from single origin, Criollo cocoa from Peru, combined with plump rasins and whole, crisp hazelnuts. The premium ingredients result in a classic with much added flavour.

A single origin dark chocolate infused with organic orange essence. Created from Baracoan beans from Cuba that offer notes of honey to this perfectly balanced fruit and chocolate medley by Willies chocolates. 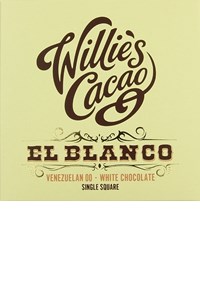 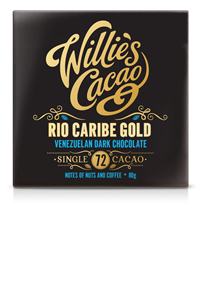 This single origin, dark chocolate bar by Willies chocolate is made from Trinitario cocoa beans from Venezuela. The beans from this region are full of flavour with complex coffee and nut notes. 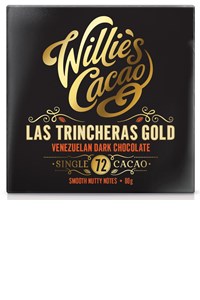 This smooth dark chocolate bar is created from fine flavour, Trinitario cocoa beans grown on the Hacienda Las Trincheras in Venezuela. A wonderfully rich and balanced flavour profile with notes of dried fruit and nuts. 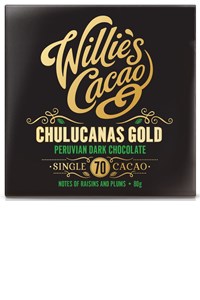 This single origin, dark chocolate bar by Willies chocolate is created from fine flavour Criollo cocoa from Peru, in the foothills of the Andes, in the lush Amazonian rainforests. The flavour notes are raisins and plums 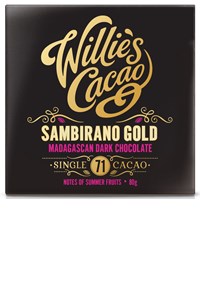 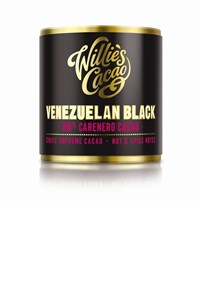 A block of 100% pure cocoa created by Willies chocolate for use with cooking and desserts. Made exclusively from Criollo cocoa from Venezuela. Flavour notes of nut and spice with a full bodied, strong chocolaty taste. 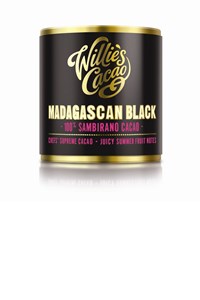 A block of 100% pure cocoa created by Willies chocolate for use with cooking and desserts. Created from a mix of Trinitario, Forestero & Criollo cocoa beans from the world renowned Millot plantation in Madagascar. 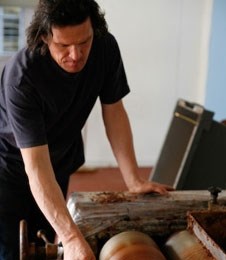 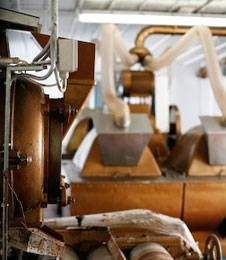 Willie's Cacao will be known to many people from the Channel 4 television series 'Willie's Wonky Chocolate Factory' which aired in the UK in 2008. This four part TV series followed Willie Harcourt-Cooze, married father of three, on his journey from dream to commercial reality. Filmed in a fly-on-the-wall style by Channel 4, the series documented Willies story from his love of Venezuela, which eventually led to him purchasing a 1000 acre Cacao farm, setting up his own Devon chocolate factory which culminated in him seeing his product on the shelves of a well known supermarket.

How it all began 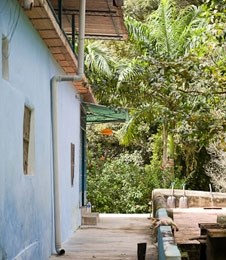 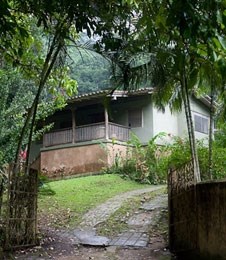 Willie's chocolate journey really all began on Willies honeymoon in 1993 where Willie and his wife heard of a 1000 acre cacao farm 'El Tesoro' (meaning treasure in Spanish) in Choroni was for sale. They visited and both fell in love with the property before returning to London. One year later they emigrated to Venezuela to purchase El Tesoro.

Willie's plantation was planted with 50,000 trees of the Criollo cultivar. The Criollo is one of the best quality cocoa types available, producing lower yields than many other cultivars but offering so much more flavour. It is also one of the least robust cultivars and so one of many reasons for its higher price when used for making chocolate.

After learning all about cocoa and the chocolate making process in Venezuela, where it all began, Willie and his wife moved back to Devon to set up their chocolate business and in 2007 began the reality of turning the dream into chocolate. 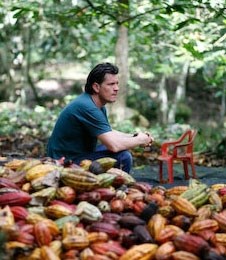 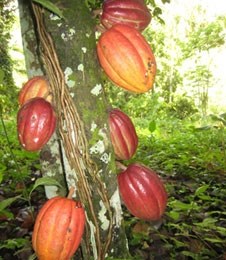 Technically not classed as chocolate at all but 'Cacao' (100% cocoa), the first batch of 100% cocoa blocks made by Willies chocolate were intended for use as an ingredient for cooking in both savoury and sweet dishes. Common practise in Southern America for centuries this was another first for the UK as chocolate was, and still is, generally enjoyed as a sweet treat mostly in the forms of drinking chocolate or as confectionery. Willie's plans were to bring this cocoa tradition back to the UK in a new form. Willie's 'Venezuelan Black' was launched in cylindrical blocks using different types of 'fine flavour' cocoas from Venezuela and bought in raw cocoa beans from other world class cocoa growing origins and estates.

The TV show included many recipes, both sweet and savoury, old and new, using the Venezuelan Black range of 100% cacao. Not surprisingly the TV spawned a recipe book 'Willies chocolate Bible' and catapulted Willies Cacao, the brand, yet further into the British market. This recipe book contains so many innovative recipes using cocoa and is beautifully presented with some great photography. It includes a brief story of Willies chocolate and a history of cocoa from the bean through to the making of chocolate.

The next obvious step for Willie was to create a line of chocolate bars, including ingredients such as sugar (the essential ingredient to turn Cacao into chocolate) and flavourings with the intention to appeal to a wider UK audience and in 2008 the TV show was recommissioned for a second series, 'Willies chocolate revolution: raising the bar'. This was aired by Channel 4 in 2009. This range of Willie's chocolate bars now includes single milk, dark and white chocolate bars made from single origin cocoa and including natural flavourings.

Over 250 of the finest single origin chocolate bars made with the purest ingredients, available to purchase online.

Gourmet chocolate selection boxes, chosen for their purity of ingredients, when you want to give the very best. 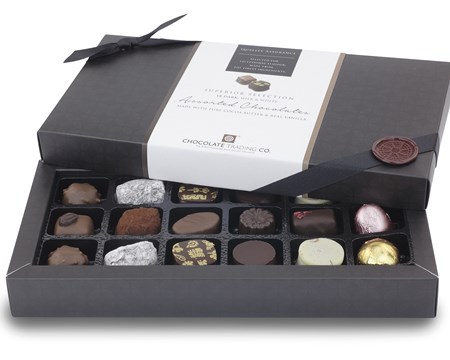 Your brand printed directly onto fine-quality chocolate is bound to impress.

Whether you choose from our Luxury or Superior ranges, every bite will impress.

Get inspiration from the range of bespoke gifts and designs we've created. 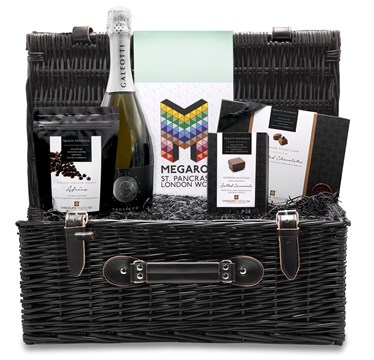