Pralus, situated in Roanne, France, are one of the few chocolate houses creating chocolate direct from the cocoa bean and as such known as a bean to bar chocolate maker or cacaofevier. Owner, François Pralus, produces chocolate of exceptional quality, achieving accolades from The Grand Prix d’Excellence International du Chocolat and the Grand Prix du Festival International du Chocolat. Pralus own their own cocoa plantation in Madagascar and so have direct control over the quality of cocoa grown and used in the creation of their fine chocolate. Pralus have also successfully managed to use the infamous Forastero cocoa in some of their origin bars with truly amazing results. Credit indeed to a true bean to bar chocolate maker. 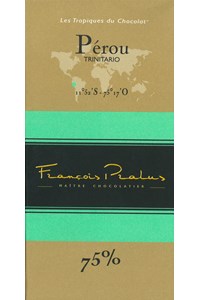 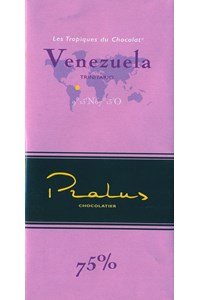 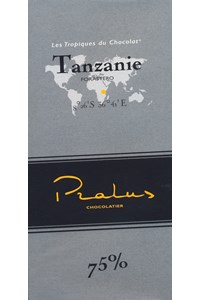 Balsamic, treacle and toffee apples all spring to mind with the abundance of caramalised and condensed sweet flavours contained inside this Pralus, single origin, organic chocolate bar. 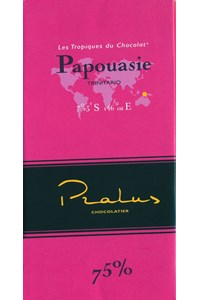 Distinct notes of Rhubarb are found within this fine dark chocolate bar by Pralus. We would even go as far to describe it as rhubarb crumble with cream, due to the toffee sweetness combined with a wonderfully creamy melt.

This milk chocolate bar from Pralus holds a rich, caramelised nut and toffee flavour. Best described as a rich butter fudge but made with less sugar due the higher than average cocoa content of 45%. 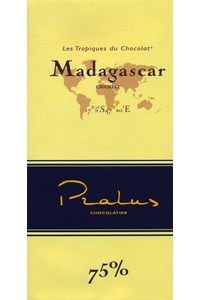 A flamboyant character, organic dark chocolate bar from Pralus with many fruit and acidulous top notes from raspberry to red wine, continuing through the more caramelised richer flavours to a treacle like finish. Organic. 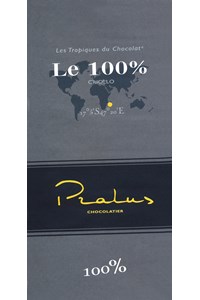 The ultimate in cocoa content and for the strict, extreme bitter chocolate lovers. Pralus use only organic, fine flavour, Criollo cocoa from Madagascar to create this bar. Containing no sugar so also suitable for diabetics. 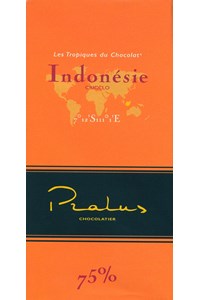 A dark chocolate with noticeable orange peel notes with pleasing acidity to begin with evolving into a woody, liquorice and toffee notes finish. Exclusively using fine flavour, Criollo cocoa from the island of Java in Indonesia. 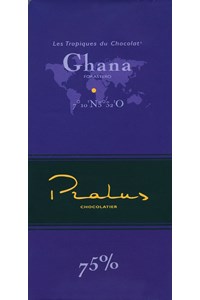 A robust and bitter, single origin chocolate from Pralus with a slight acidity to the edge to balance. Whilst a step over the edge for most tastes, this is a high cocoa chocolate lovers dream. 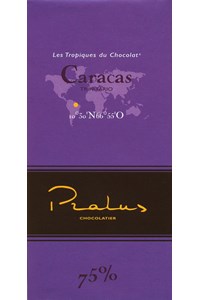 Fruits are dominant throughout this dark chocolate bar from Pralus with very little bitterness or astringency. A perfectly balanced chocolate and palatable to all dark chocolate lovers. 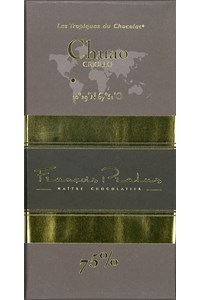 A exceptionally fruity and balanced dark chocolate bar from Pralus with slight bitterness matched with an acidulous edge. Long lasting and equally as impressive as Amedei's version. Pralus tends to have a higher roast flavour.

In order to concoct the quintessential aromas and original bouquets, each “marriage” of chocolate is blended and refined in his Laboratoire Chocolat, set up in 1991.

Hailing from the finest Criollo, Trinitario and Forastero, François Pralus imports no less than eighteen different varieties of bean - from Central America, South America, Madagascar, Sao Tome and Principe and Indonesia - for his blends. Some of which contain eighty percent cocoa. The remarkable creativity and the high standards of the Maison Pralus have been awarded with the highest accolades: The Grand Prix d’Excellence International du Chocolat and the Grand Prix du Festival International du Chocolat.

François Pralus now has his own cacao plantation in Madagascar on the island of Nosy Be, also known as the “isle of perfumes”. From Sao Tome by the way of Brazil and Venezuela, Monsieur Pralus has personally selected cacao for the plantation from the finest origins in the world. The beans are grown, harvested and fermented with care and then roasted and transformed into a delightful chocolate in his Roanne facility.

Everyone can fall under a magic spell; François Pralus, for his part, fell under that of chocolate and praline at a very early age. Inherited from his father Auguste, his taste for the black gold and other sugared sweets soon transformed itself into a passion which will never leave him. This passion ultimately led him to cultivate the reputed Criollo under the Malagasy sky and to produce his very own chocolate.

Always inventive, François Pralus concentrates his many talents in his patisserie creations and, equally, his chocolate “paintings”.

A dynamic twenty-five strong team works together developing chocolates in the heart of the Pralus site. Since 1988, François Pralus has been observing the traditions laid down by his father in 1948. In accordance with the key principles established by the founders of Pralus: Discover and promote new products and flavours while maintaining the highest possible quality and respecting artisan traditions.

Pralus are one of the few chocolate houses creating chocolate direct from the bean, known as a bean to bar chocolate maker (cacaofevier). Pralus own their own cocoa plantation in Madagascar and so have direct control over the quality of cocoa produced and used in their chocolate, they have also successfully managed to use Forestero cocoa in some of their origin bars with amazing results.

Pralus are certainly creating some of the finest chocolate in the world. Perhaps their current artisan position and limited distribution outside France has helped keep their minds focused on creating chocolate and not perpetuating their brand image across the globe. Pralus is a true discovery in chocolate and we hope Pralus keeps its feet firmly on the ground.

A branded chocolate bar with printed wrapper and winning golden ticket inside! 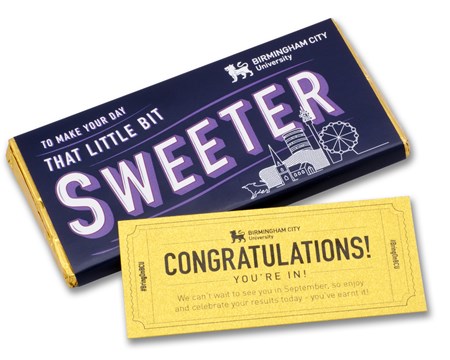